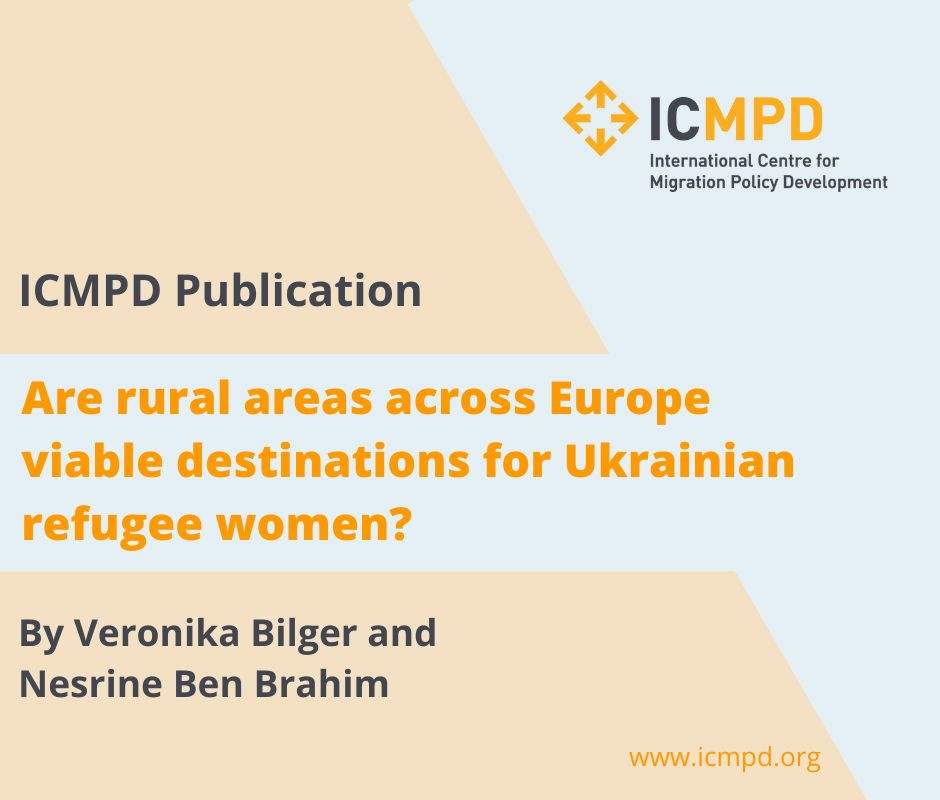 The majority of the nearly 7 million Ukrainian refugees who have left their country since the outbreak of conflict in February 2022 are women who seek protection in neighbouring countries. Many of them are currently located in national capitals or large cities. Recent discussion on how to relieve the pressure on the infrastructure of these cities has focused on accommodating refugees in rural areas.

The article prepared by Bernhard Perchinig and Jimy Perumadan highlights several important aspects regarding the integration of refugees in rural areas. It is also available in Russian and Ukrainian languages.

In its first 14 weeks, the war in Ukraine forced almost 7 million people to flee their homes and seek protection in neighbouring countries such as Poland, Romania, Hungary, and Moldova. With men aged 18 to 60 required to stay in the country, the vast majority of refugees are women. Most of them fled together with their child(ren). In April 2022, German authorities reported that 70% of the roughly 600,000 Ukrainian refugees registered in that country were women, with an estimated 30-40% being children under the age of 14.

In general, during the first phase of refugee movements triggered by war or natural disaster, the outflow tends to centre on cities in the same country or across an international border. These are the places where friends, relatives, or co-national emigrants from the region live and work and can offer housing and support.

In addition, relevant public administrative authorities and civil society organisations (CSOs), but also language schools and integration projects, are usually located in larger cities rather than in the countryside. In short, cities are the best place following arrival in a new country – when the protection seeker has to orient themselves to completely new living conditions.

What the literature says about migration and integration in cities

There is a wealth of literature on the importance of cities for the integration of migrants, and in particular refugees. Doug Saunder’s book Arrival City (2010) praises the Brazilian favelas, the Turkish gecekondular, the banlieues of Paris, London´s East End, and Berlin´s Kreuzberg as breeding grounds for creativity, innovation, and social cohesion in the face of diversity. This book won the Donner Prize ─ Canada´s equivalent of the Pulitzer Prize ─ and quickly became the new go-to guide for city planners interested in migration.

Rural areas in Europe are facing two general trends, which in general diminish their potential for migrant integration: Depopulation and population ageing, with the associated decline of the regional economy. All over Europe, young people are continuing to leave their villages and smaller towns for education and training opportunities in larger cities. They also tend not to return after earning their diploma – better opportunities for employment, an anonymous private life, and leisure and recreation lead to a widespread preference for larger cities.

However, it is necessary in this aspect to distinguish between rural areas and medium-sized towns (of over 25,000 inhabitants). The specific attributes of the medium-sized town setting is discussed in depth below.

A dim future for qualified workers in rural areas

In contrast, highly qualified professionals of any gender (e.g. those working in IT, medicine, finance, or the social sciences) will most likely not have a professional future in rural areas.

This movement has not gone unnoticed by migration research. Over the past five years, a growing number of studies on migrant integration in the countryside have highlighted the specific challenges, but also the advantages, of rural settlements for integration. On the positive side, these studies have highlighted that in some, but not all, villages and small towns, better housing conditions and easy mobilisation of CSOs and individuals, alongside municipal administration support, can improve integration.

How to integrate refugee women into rural labour markets?

In addition to the low number of full-time jobs for women in villages and small towns, one has to be aware that sectors with a high share of women participants (such as medicine and retail) are typically located in larger cities – as are administrative headquarters. In an environment where there is high competition for well-paying jobs and social networks play a decisive role in finding employment, refugee women, who are not part of these networks, will need specific support.