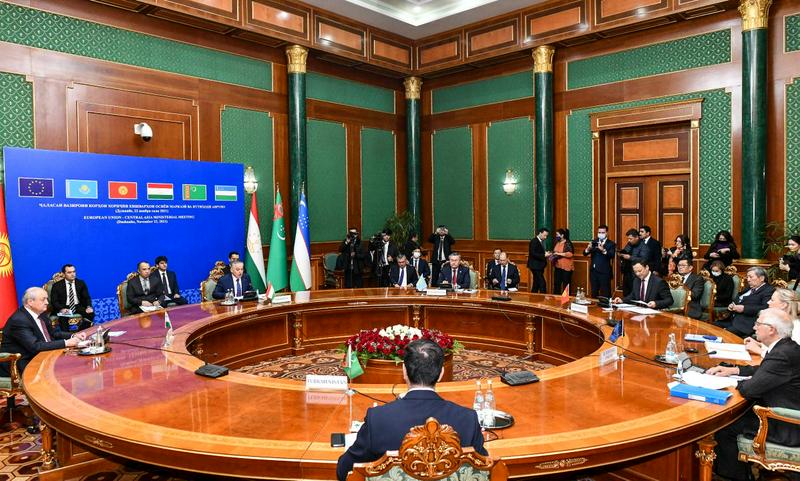 On 22 November, Dushanbe hosted the 17th EU-Central Asia Ministerial Meeting featuring the Foreign Ministers of Kazakhstan, the Kyrgyz Republic, Tajikistan, Turkmenistan and Uzbekistan, as well as the European Union’s (EU) High Representative for Foreign Affairs and Security Policy and EU Commissioner for International Partnerships. The Parties met to discuss the state of cooperation between the EU and the countries of Central Asia and the prospects for expanding it in the areas of trade, investment and environment, as well as common security challenges. Participants also exchanged views on issues of mutual interest, such as the evolving situation in Afghanistan.

The EU presented its regional development cooperation priorities, in line with the 2019 EU Strategy on Central Asia: promoting resilience, prosperity and regional cooperation. The current programming of development funds within the multiannual financial framework shall support their implementation.

Participants reaffirmed their joint commitment to strengthen EU-Central Asia cooperation in a Joint Communiqué, stressing the need to make progress in areas such as the rule of law, democracy, governance, gender equality and universal human rights. As noted by High Representative Josep Borrell: “The countries of Central Asia have made remarkable achievements since their independence 30 years ago. The EU and Central Asia share a strong commitment to intensify cooperation to build back better following COVID-19. The EU can make a strong contribution to the future of the region if Central Asian states show determination in their commitment to reform and democracy.”

The need to address labour rights and create opportunities for youth in the region, including better access to quality education and decent work, was equally emphasised. In this regard, the EU proposed to explore the possibility to set up a regional dialogue on the effective implementation of international labour standards. The Kyrgyz Republic suggested the establishment of a European University in Central Asia to support science, research and innovation.

Concerning the COVID-19 pandemic, particular emphasis was placed on the required vaccination support, along with a green and sustainable recovery of the region. The EU further encouraged continued progress in the implementation of the Paris climate commitments and the region’s transition towards a green economy. The latter should be based on increasing the share of renewable energies and the objective to reach climate neutrality. For Central Asia, cooperation on water and energy resources remains of particular importance. The development of regional cooperation in the areas of green economy, digitalization and an improved business environment was equally addressed during the EU-Central Asia Economic Forum held in Kyrgyzstan in early November. In this vein, the EU is beginning preparations for two regional Team Europe Initiatives, one of which will be devoted to Water, Energy and Climate.

Discussion about security challenges revolved around the regional repercussions of the situation in Afghanistan. While agreeing on the need to expand humanitarian assistance, participants stressed the need to prevent the country from turning into a regional terrorist hub again. They also acknowledged the necessity to strengthen cooperation for preventing unsafe and irregular migratory movements, as well as to counter migrant smuggling and trafficking in human beings.

Read more about the Meeting