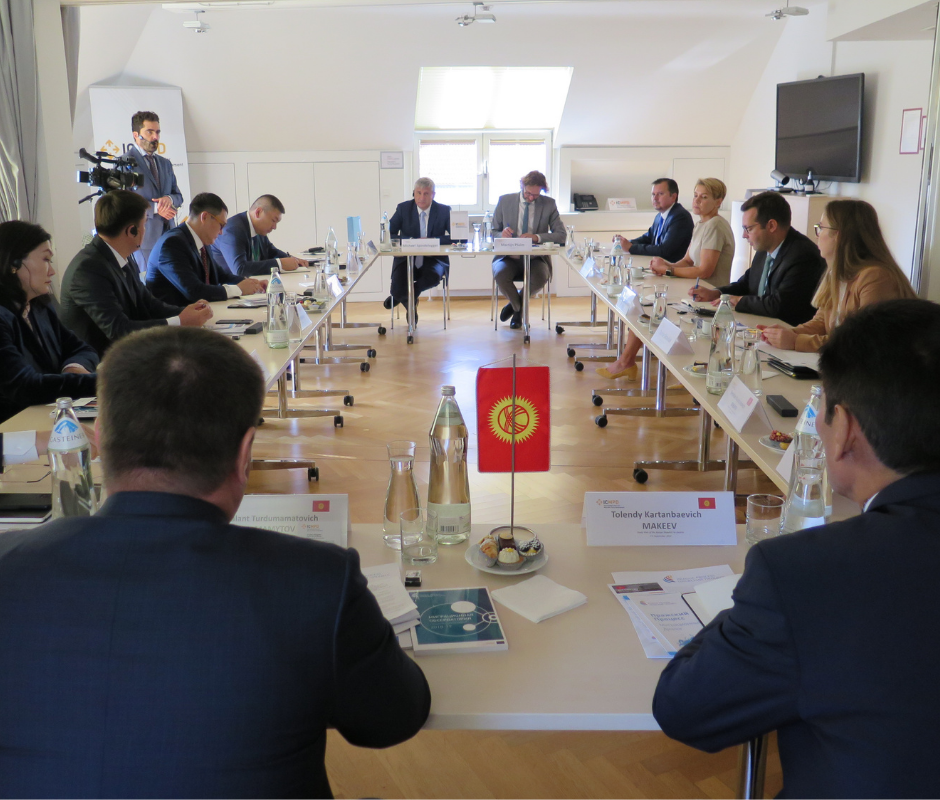 Upon the request of the Kyrgyz Republic, a study visit to Austria was organised within the Prague Process on 7-9 September 2021. The study visit occurred against the background of a possible mass influx of migrants and refugees from Afghanistan, which could affect the Kyrgyz Republic and the entire Central Asian region. The representatives of the Council for Migration, Compatriots and Diaspora Abroad under the Speaker of the Kyrgyz Parliament thus wanted to learn from Austria’s and ICMPD’s experience, following the migration crisis of 2015-2016.

The Kyrgyz delegation met with the Joint Cooperation Platform (JCP), the Austrian Federal Ministry of Interior, and with ICMPD. During the meeting with representatives of the Austrian Interior Ministry and the JCP, the Kyrgyz delegation learned about the measures implemented by Austria and other EU Member States in response to the migration crisis in 2015-2016. Furthermore, the current situation concerning illegal border crossings and asylum applications was presented, as well as the concrete steps taken by Austria and at European level in addressing them. The Kyrgyz delegation also had the opportunity to visit the Ministry’s situation room, which allows to monitor illegal border crossings in Austria and its vicinity in real time, as well as for a swift information exchange and coordination among EU Member States.

Kyrgyzstan is interested in closer cooperation with ICMPD, in particular in opening of Migrant Resource Centres. A high-level delegation of the Kyrgyz Republic led by Mr Talant Mamytov, Speaker of the Parliament of the Kyrgyz Republic, met with ICMPD Director General Mr Michael Spindelegger. During the meeting, Mr Mamytov highlighted that Kyrgyzstan is ready to establish and host a regional platform to assess and discuss security issues arising from ongoing developments in Afghanistan. Furthermore, he invited the Prague Process to hold one of its meetings in Kyrgyzstan in the near future. At the end of the meeting, both parties signed a Memorandum of Understanding to define the direction of the future cooperation. The final day featured a detailed presentation of ICMPD’s diverse areas of work, ranging from border management and security, to anti-trafficking, the operating of Migrant Resource Centres, as well as cooperation within regional migration dialogues such as the Prague Process and Budapest Process.