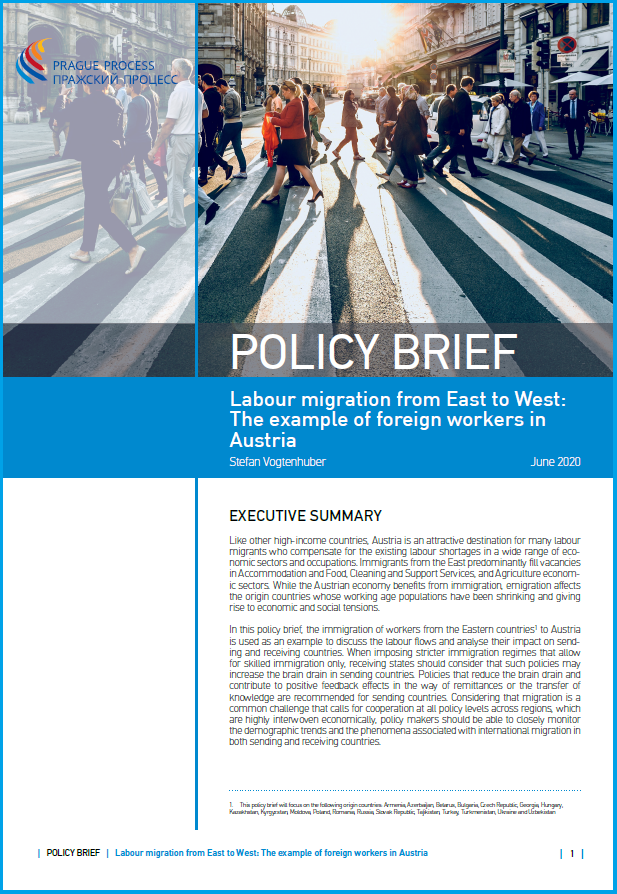 Like other high-income countries, Austria is an attractive destination for many labour migrants who compensate for the existing labour shortages in a wide range of economic sectors and occupations. Immigrants from the East predominantly fill vacancies in Accommodation and Food, Cleaning and Support Services, and Agriculture economic sectors. While the Austrian economy benefits from immigration, emigration affects the origin countries whose working-age populations have been shrinking and giving rise to economic and social tensions.

The new policy brief "Labour migration from East to West: The example of foreign workers in Austria" authored by Mr Stefan Vogtenhuber and released by the Prague Process Migration Observatory uses the immigration of workers from the Eastern countries to Austria as an example to discuss the labour flows and analyse their impact on sending and receiving countries.

The brief argues that when imposing stricter immigration regimes that allow for skilled immigration only, receiving states should consider that such policies may increase the brain drain in sending countries. Policies that reduce the brain drain and contribute to positive feedback effects in the way of remittances or the transfer of knowledge are recommended for sending countries. Considering that migration is a common challenge that calls for cooperation at all policy levels across regions, which are highly interwoven economically, policymakers should be able to closely monitor the demographic trends and the phenomena associated with international migration in both sending and receiving countries.