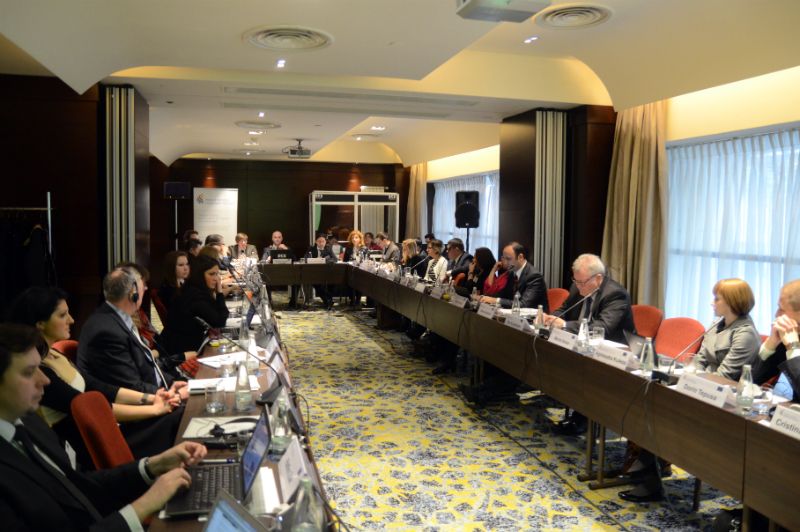 The Third PP1 Thematic Workshop was organised in Bucharest on 4-5 March 2014.

The third Thematic Workshop of Pilot Project 1 took place in Bucharest on 4–5 March and gathered representatives of 18 Prague Process participating states, IOM, Frontex and ICMPD. The meeting was focused on cooperation on readmission and return.

The meeting agenda was divided into two working sessions followed by a special session dedicated to PP1 Handbook and Guidelines. In the introductory presentation Mr. Octavian Predescu from the Ministry of Internal Affairs of Romania discussed the experience in cooperation on readmission and return of the states participating in the project. Such issues as cooperation with diplomatic missions and within readmission committees as well as organization of safe and humane returns were covered in the presentation.

Factors shaping state-to-state cooperation on readmission and return were presented by Mr. Valentin Trandafir from the Ministry of Internal Affairs of Romania. In the following presentation Mr. Oleg Korneev, University of Sheffield, discussed the EU perspective on cooperation on readmission. National experience was thereafter presented by experts from Moldova, Russia, Poland and Hungary.

The second session of the meeting started with a presentation by Mr. Trandafir on practical cooperation with countries of origin regarding the organization and running of return operations. The EURIT project was then presented by Mr. Ruben Laurijssens from the Netherlands. Mr. Per Kvistholm, Head of Return Operations in Frontex, introduced the newly adopted code of conduct on return operations. A move on Joint Return Operations called “Flight 8751” complemented the speaker’s intervention.

The session was closed by presentations by Mr. Radim Zak, ICMPD, on a project on return called FReM, and Ms. Maria Voica from IOM Romania who discussed some successful stories of assisted voluntary returns.

During the session dedicated PP1 Handbook and Guidelines participants discussed the content of the document and agreed to some proposed changes thereof. The states participating in the project expressed also their willingness to cooperate closely during the drafting process. The document will be adopted by project participants during the final workshop to be held in Warsaw in July 2014.

The agenda of the workshop is available in English and Russian.

Ms. Agnieszka KULESA, Ministry of Interior of the Republic of Poland, PP1 Handbook and Guidelines

Mr. Boris GANDRABURA, Ministry of Interior, Moldova, Implementation of readmission agreements in the Republic of Moldova

Mr. Boris GANDRABURA, Ministry of Interior, Moldova, Implementation of the return procedures in the Republic of Moldova

Mr. Zoltán DÓCZI, Ministry of Interior, Hungary, Procedural and practical aspects of cooperation with diplomatic missions of countries of origin