Georgian Diaspora and Migrant Communities in Germany, Greece and Turkey

The objective of this study was to assess different and specific needs of Georgian migrant and diaspora communities in Germany, Greece and Turkey, as well as these communities’ interest and potential to engage in transnational development activities for the benefit of the country of current residence and Georgia. A combination of qualitative and quantitative research methods has been applied to shed light on the characteristics of the heterogeneous Georgian diaspora.

In all three countries, ties between Georgian migrants, diaspora individuals and Georgia are strong, as shown by the general lack of interest in obtaining the citizenship of the country of residence, the wish to return home and the frequency of home visits. These ties are reinforced by diaspora organisations, which create bridges between Georgia and the residence country and promote the Georgian culture and language. The large majority of Georgian migrants, in particular, those who have children in Georgia, send remittances, which are mainly used for investments in farm equipment, health and education. Survey respondents are generally willing to invest in private sector activities and development activities in Georgia. The educational level among Georgian migrants is relatively high. Survey respondents consider the experience and skills they gained during their period abroad as useful for Georgia. This suggests that involving Georgian migrants and diaspora members in development activities, especially activities involving the transfer of their knowledge and skills, would greatly benefit Georgia and its society. However, brain waste seems to be a common issue among Georgian migrants in the three countries, as most consider themselves to be working below their level of qualification.

In response to having identified a certain lack of trust between the migrants, diaspora individuals and organisations, Georgian state institutions and representations abroad, the study makes several recommendations for improving relations, supporting Georgian migrants during their stay abroad and increasing their potential as development actors.

The study was carried out within the ‘Enhancing the Role of Georgian Migrants at Home (ERGEM)’ project funded by the European Union’s Thematic Programme for Cooperation with Third Countries in the Areas of Migration and Asylum and by Turkey. The project was implemented under the leadership of the Danish Refugee Council in cooperation with the International Centre for Migration Policy Development and a consortium of project partners and associated partners which includes the Ministry of Foreign Affairs of Turkey, the Ministry of the Interior of Poland, the Public Service Development Agency (Ministry of Justice of Georgia), the Office of the State Minister of Georgia for Diaspora Issues and the Ministry of Internally Displaced Persons from the
Occupied Territories, Refugees and Accommodation of Georgia. 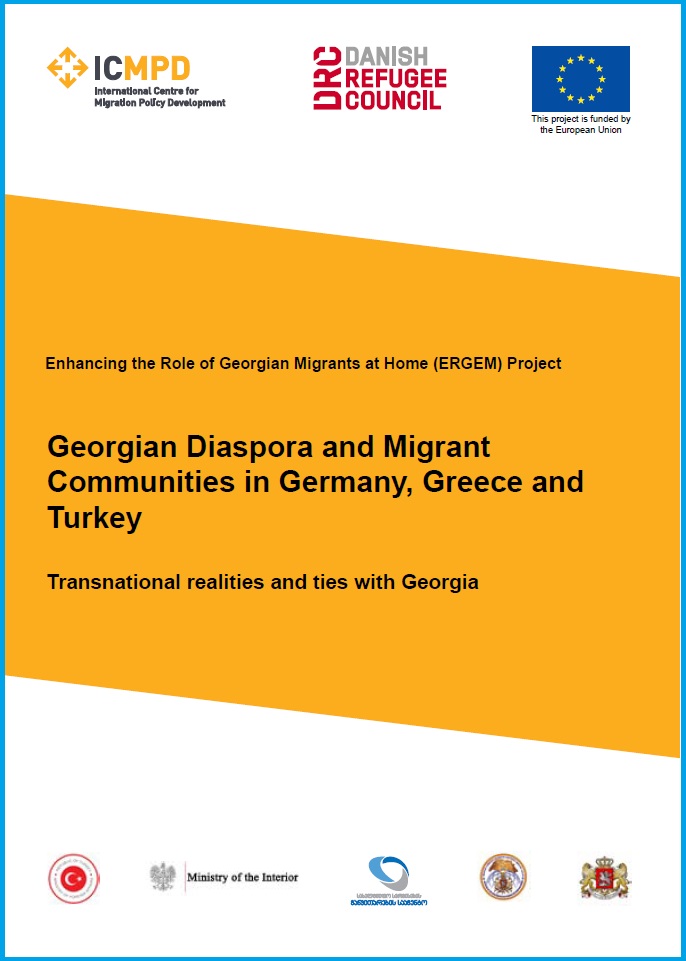