The Implementation of the Common European Asylum System

This study was commissioned by the European Parliament’s Policy Department for Citizens’ Rights and Constitutional Affairs at the request of the LIBE Committee. It provides an overview of the current implementation of the Common European Asylum System (CEAS) from both a legal and practical perspective. Against the background of large inflows of seekers of international protection, the study covers the CEAS instruments as well as the EU policy responses brought forward in 2015 until May 2016.

The arrival of approximately 1.3 million asylum applicants to Europe in 2015 and its resulting complexities unfolded a “perfect storm”1 which shook the Common European Asylum System (CEAS) to its very foundation. In summer 2015, the CEAS was catering to the reception and welcoming of everyone who came along the Western Balkan route, while only 6 months later
the very same legal instruments seemed to allow the establishment of border fences, the introduction of national upper limits for asylum applications and the proliferation of fast-track return procedures for “irregularly arriving refugees and migrants”. In addition to this, the public debate shifted from welcoming “refugees” and “persons in need of protection”, to objecting to arrivals of “economic migrants” or “illegals”. Policy makers were widely overwhelmed and seemed to remain in a state of shock due to the mass of refugees and migrants transiting or arriving in EU MS.

the initial shock, the EU and the EU MS recognised that the CEAS instruments were failing in the face of the sheer number of applicants arriving in certain EU MS. However, the approaches by policy makers at EU level and those at level could not be more different. While the EU stressed that only a European Union acting in solidarity could shoulder
the unprecedented mass arrivals, EU MS went in the opposite direction by making unilateral policy decisions: including building fences, introducing upper ceilings, using the wide discretion of the CEAS to create unattractive national asylum systems that deter asylum seekers and showing minimal commitment to solidarity measures. 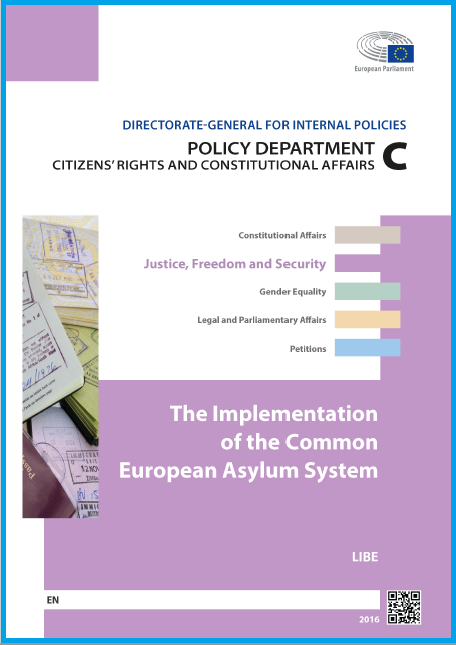