So far, the incidence of human trafficking cases among those fleeing the war in Ukraine has remained insignificant. Still, people who fled the conflict are seeing their personal resources (be of financial or emotional nature) depleted with grimmer perspectives; As their displacement protracts, their vulnerability to exploitation, including trafficking, increases. These vulnerabilities need to be addressed now to avert the descent of a secondary crisis among displaced populations in their host communities later on. The persisting nature of the risks is well illustrated e.g. by ‘huge spikes’ in online searches across multiple languages and countries for explicit content and sexual services from Ukrainian women and girls.

The existing research by the International Centre for Migration Policy Development (ICMPD) has demonstrated how people fleeing the conflict become vulnerable to human trafficking. In this Policy Brief, we examine the nature of these vulnerabilities and provide guidance as to where the countries hosting the people displaced by the war need to invest their attention and efforts to tackle the increased dangers of human trafficking. 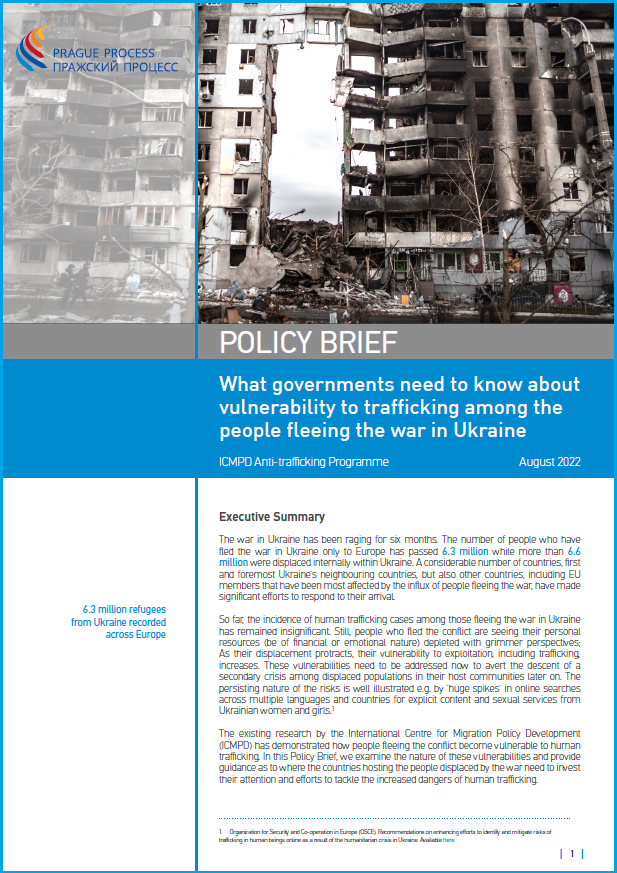 The brief was prepared by the Anti-trafficking Programme of ICMPD | This publication was produced in the framework of the ‘Prague Process: Dialogue, Analyses and Training in Action’ initiative, a component of the Migration Partnership Facility, with the assistance of the European Union. The contents of this publication are the sole responsibility of the authors and in no way represent the views of the European Union.