The war in Ukraine: Post-war scenarios and migration repercussions

Russia’s invasion of Ukraine on 24 February has resulted in the displacement of more than 14 million people, representing one quarter to one third of the entire population. Up to two thirds have been displaced internally with another 6 million people fleeing to neighbouring countries, mostly to the EU, but also Russia and Turkey. As of late March, following the withdrawal of Russia’s forces from the north and northeast, people also began returning. This Policy Brief first develops six scenarios of the outcome of the war. Second, it identifies key drivers of forced migration as well as the opportunity/constraints structure including pre-war migration networks and migration aspirations that influence migration decisions among displaced persons from Ukraine. Third, it suggests six postwar migration scenarios investigating the propensity for people to remain in their current host countries or return to Ukraine. The resulting scenarios suggest that fewer than 1.65 million to 21 million people will stay in host countries. The most probable scenario suggests that around 2.9 million will remain in destination countries, and could be joined by 580,000 family members. Any scenario, however, would be affected and can be manipulated by respective policy measures. 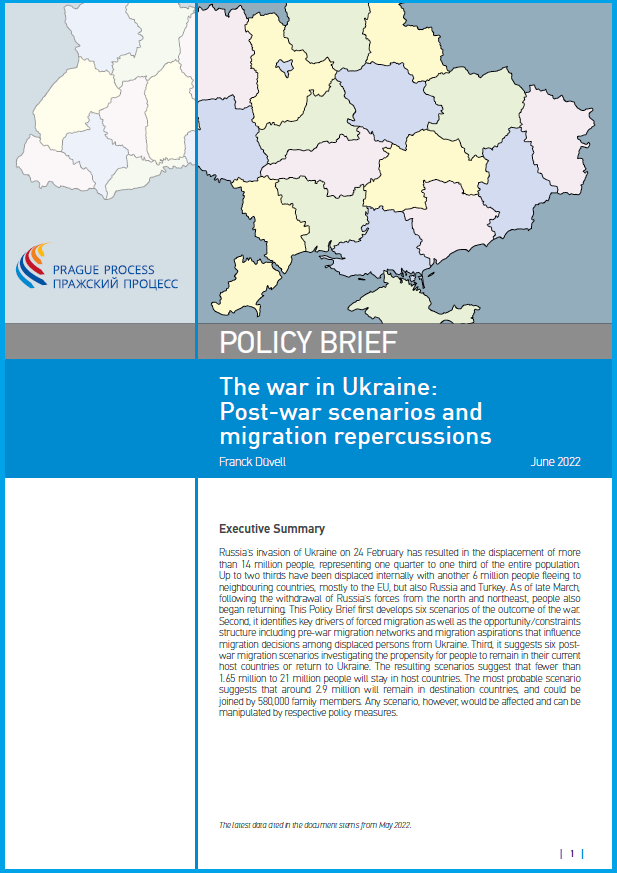 Franck Düvell, Senior researcher and FFVT Coordinator, Institute for Migration Research and Intercultural Studies (IMIS), Osnabruck University. | This publication was produced in the framework of the ‘Prague Process: Dialogue, Analyses and Training in Action’ initiative, a component of the Migration Partnership Facility, with the assistance of the European Union. The contents of this publication are the sole responsibility of the author and in no way represent the views of the European Union.