Ukrainian Labour Migration to the EU

Since 2014, the number of Ukrainian labour migrants moving to the European Union (EU) has increased significantly. In 2019 alone, Ukrainian nationals received 660,000 residence permits for remunerated activities across the member states – the largest external labour force in the EU. The reliance of member state economies on workers from Ukraine has thus reached significant levels, as exemplified by the labour shortage seen during the COVID-19 crisis that forced the EU to shut down its borders.

While Ukrainian labour migration to the EU produces economic benefits on both sides, the exchange is beset by multiple challenges. These include limited protection of Ukrainian labour migrants, circumvention of work permit rules, and attempts by unscrupulous actors to lure Ukrainians into accepting precarious or non-existent jobs. This report assesses these challenges and their implications, before providing a set of targeted solutions, ranked according to a Feasibility Score. The proposed solutions range from establishing a ‘one-stop-shop’ for information provision and a joint employment database for non-EU nationals, to launching negotiations on amending the legislation on work permits. 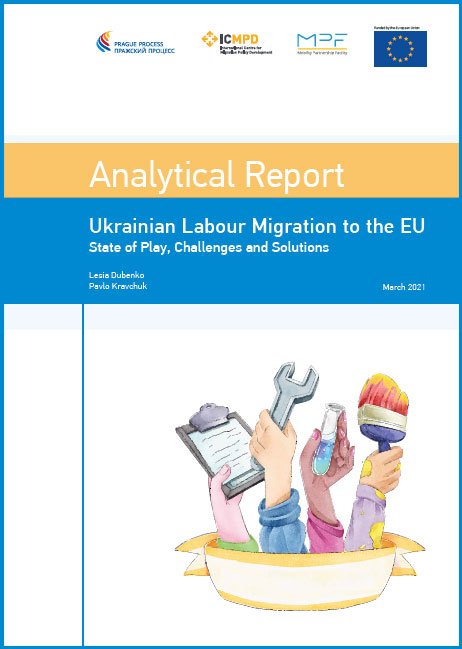 Lesia Dubenko, Analyst at the Kyiv-based think tank Europe Without Barriers, and Pavlo Kravchuk, Migration and Border Management Expert at Europe Without Barriers | This publication was produced in the framework of the ‘Prague Process: Dialogue, Analyses and Training in Action’ initiative, a component of the Mobility Partnership Facility II project, with the assistance of the European Union. The contents of this publication are the sole responsibility of the author and in no way represent the views of the European Union.