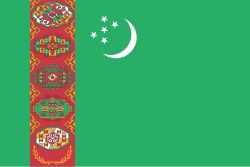 Migratory movements and the labour migration are under the government control. The main countries of destination are Russia, Ukraine, Kazakhstan, Azerbaijan, Turkey, and Iran. According to the official data of the Russian Federal State Statistics Service, the number of migrants from Turkmenistan increased from 5,986 persons in 2013 to 6,033 in 2014. The main flow of labour migration is directed towards the oil- and gas-producing West Siberian regions of the Russian Federation, such as Tyumen Region and Khanty-Mansi and Yamalo-Nenets Autonomous Districts, and the majority of labour migrants from Turkmenistan are employed in oil and gas industry. According to the expert estimates, remittances from abroad exceed 35% of the national GDP.